It’s really only in this past year that I have truly discovered who I am and what my style is. Though still varying from time to time and mood to mood, the general idea is always the same. I’ve never been one to have the latest trends, not because I don’t follow what “in” but more due to not having any clue about what I wanted to convey through my style.

One major change I have made has been going purple with my hair. It’s something I have wanted to do for years but never had the guts to do. A big part being I was worried about what others would say, family and friends alike, but once I realized that not letting me be me was doing more harm then good and decided I was not going to hold myself back from the things I wanted, I have never felt so happy in my life.

This outfit is not one you would have seen me in even a few months ago, I have pretty big hips and a big booty so boyfriend jeans aren’t really part of my go to’s when it comes to bottoms. But I finally persuaded myself into getting some and I’m so glad I did. It took a lot of looking but these ones are from Charlotte Russe and fit quite well. They are not unflattering at all, which is a miracle for me and jeans, and have actually become one of my favorite pants to wear recently.

The shirt is a whole different story. I got it at OutsideLands this year and I literally never take it off. I sleep in it, I do my yoga in it, so I wear it pretty much everywhere. Before the festival I told my friend the only band I was going to buy merch from was the Gorillaz and I meant it. The pastel pink is was drew me in because it was right when I was starting to get into all the pastels and softer colors than I had been used to wearing. Plus the Hunter S. Thompson-esk feeling to it was really what sold me.

I initially wanted this post to just be about my outfit but when I started writing it I realized that to me it meant much more. For me it was a way for me to further express myself without feeling foolish, I know it’s easier said than done, but once you realize that being true to yourself is the most important thing you can do for yourself you’ll feel much more confident and willing to venture into a whole new world that you never though you would. So dye your hair a crazy color, wear something you normally wouldn’t, get that tattoo you’ve been wanting and finally just try something new.

One thought on “Try Something New” 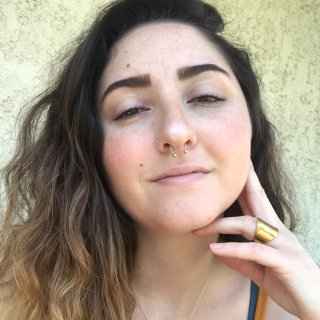 Budding Herbalist just trying to live my best and healthiest life while helping others along the way. Owner of Bumble Bri Apothecary Etsy shop.

Ice cream in 42 degree weather 🥶
Had a great birthday surprise from Adam and went to the Space Needle today! ❄️
💚🌲🌳🌿🍃
Never going to get tired of this 🥰
Honeydew in the sun ☀️
Never been so excited for a sticker in my life🔥 this is also the template for my next tattoo 🤷🏻‍♀️ #fireforce #benimaru